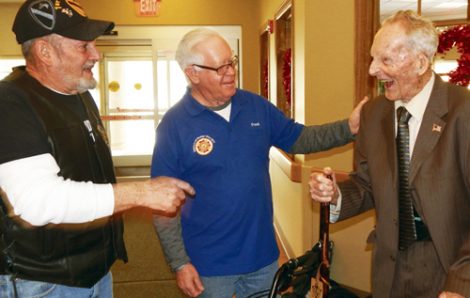 NORTH JACKSON –World War II veteran Dan King got a surprise Friday for his 97th birthday when he was made an honorary lifetime member of the local Veterans of Foreign Wars.

Family, friends and fellow veterans gathered at the Antonine Village for King’s Valentine’s Day birthday celebration, where he received the news of his honorary membership.

King, a former Lordstown resident, served in the Army Air Corps and was a prisoner of war in Germany. Many of those at the event said King is a great storyteller as he shares his war adventures and tales of his life.

Fred Schrock of the Veterans of Foreign Wars Post 9571 in Ellsworth said the post is naming King an honorary lifetime member, with the official action to be taken at the next post meeting.

“He is worthy of it. He has never joined,

and we wanted him to be an honorary member. He has been a member of the Prisoner of War MIA group, which he said he has identified with more. His service to our country is worth this recognition,” Schrock said.

Schrock said this is the first honorary membership the post has done.

King signed the necessary paperwork as he and his wife, Shirley, 94, were waiting for lunch and birthday cake at the Antonine Village, where they are residents.

He said he was honored and surprised to receive the recognition.

Fellow POW-MIA veteran Don Freer of Howland joined King at the party. The two had served together in the Air Corpss in Europe with King a fighter pilot and Freer a bomber pilot.

“We are the last of our local POW chapter,” King said.

King said he was shot down during the war and was a prisoner — with many people not knowing if he was alive or dead for five to six months.

As for turning 97, King said he had not even noticed the difference of being one year older.

“He has a great memory and can tell you everything about his service,” said Joyce Jamison of North Jackson, a family friend.

King credits his wife for his longevity and support. “She has been with me through thick and thin,” he said.

Cheryl Vance of Southington, who attends the church, said the Kings are members.

“He would speak at the church on Veterans Day. He has had an amazing life and the stories he has to tell and share with others are wonderful to listen to. We are all so blessed to hear the stories,” Vance said.

Natalie Dechant of the North Jackson Historical Society said when she spoke to King she found him to be a “treasure of information.”

In addition to his military service, King was the former fire chief in North Jackson and also a Boy Scout leader and member of the Masons. King was the fire chief from when the department began in 1953 to the 1970s.

Dechant said the historical society has been gathering information and stories from King.

Brenda McDougal, battalion chief with the local fire department, said King did much as he served the community as fire chief and is remembered for his all service.

Death toll from COVID-19 rises to 1,868, according to latest figures from China – National

Death toll from COVID-19 rises to 1,868, according to latest figures from China – National

‘I just wanted to die’: the torture of an Iraqi protester | World news