Buenos Aires, Argentina – Women across several generations rallied at the foot of political power in Argentina on Wednesday to repeat their demand for the government to legalise abortion.

The political ground has shifted significantly since 2018, when legalisation advocates narrowly lost a vote in the Senate that would have turned Argentina into the largest jurisdiction in South America region to legalise abortion in the first 14 weeks.

“It feels different than in 2018,” said Maite Linares, a teacher who brought her five-year-old daughter Juana to a rally on Wednesday hosted by the feminist movement outside the Argentine Congress in Buenos Aires.

“It feels like the possibility exists that this will happen,” she told Al Jazeera. “The movement is bigger, stronger and more voices have joined our cause.”

A crucial voice is that of newly elected President Alberto Fernandez who supports legalisation and is drafting a bill to present to the Argentine Congress.

Abortion is illegal in Argentina, and carries a prison sentence, except in instances of rape, or if a mother’s health is at risk. Even so, access to the legal procedure is limited, especially in more conservative regions where the Catholic Church’s influence is more pronounced and doctors abstain from providing the procedure on moral or religious grounds.

Wednesday marked a return to the streets for those in favour of legalisation. 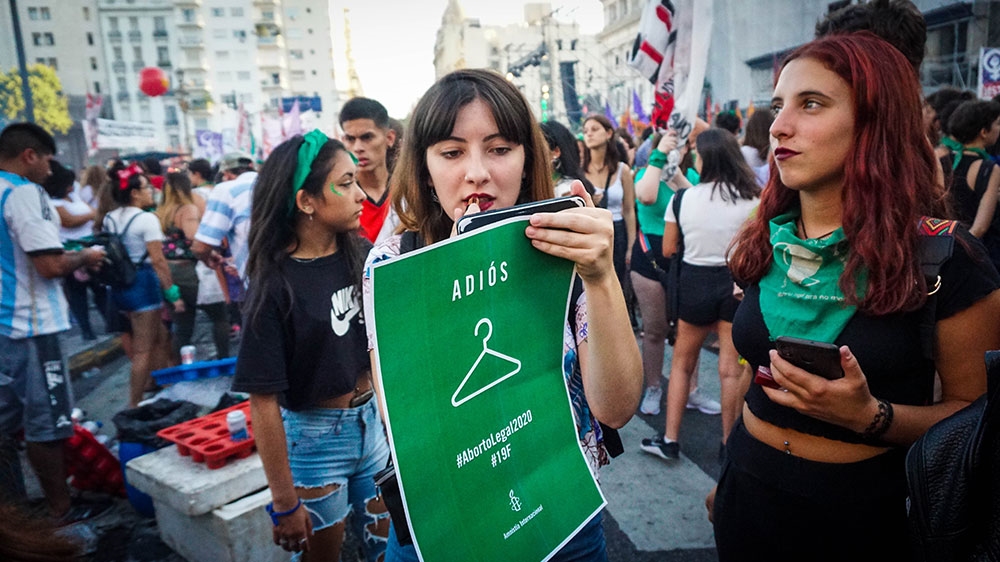 At least 80 events were scheduled across the country. In Buenos Aires, thousands flocked to the city centre, with the green handkerchief emblematic of the abortion-rights fight wrapped around wrists or heads to guard against the blazing sun. Green glitter stations were set up on the road; tarps unfurled on the ground with t-shirts and memorabilia. Members of the Chilean collective La Tesis were also on hand to lead the crowd in a performance of their feminist, A rapist in your path, anthem, which went viral last year.

“The state can’t keep deciding over our bodies,” Linares told Al Jazeera, holding Juana’s hand. “Because women have the right to decide, and to think of our bodies as a territory – a territory of struggle, emancipation and empowerment.”

“It’s very emotional, for me, being here, to the point of tears,” said Troffeli, who travelled 70km (43 miles) from her town of Pilar with and at the behest of her 12-year-old daughter Mora.

“I want to leave a better world for my daughter,” she told Al Jazeera “And being able to live this day together, it’s unforgettable. Regardless of what happens, being here – that is a result in and of itself.”

Last year, the feminist movement submitted a legalisation proposal that would ensure “women or other identities with the ability to gestate” to have access to legal, safe, publicly funded abortions in the first 14 weeks of pregnancy, and later in specific circumstances. It was never debated in 2019, and remains a proposal up for consideration in the Argentine legislature. In 2018, the government estimated that more than 350,000 clandestine abortions occur in Argentina every year. Human rights groups estimate the number is as high as 500,000.

For President Fernandez, legalising abortion is a question of public health. He has repeatedly expressed his support of decriminalisation and legalisation, noting that Argentina lives in hypocrisy when it comes to abortion. Illegality that is seldom prosecuted pushes women to abort in secrecy, he said. The hypocrisy, the president says, is that if a woman is wealthy, she can find a way to get a safe abortion. If a woman is poor, she at much greater risk.

“There are those who think that legalising abortion makes it mandatory. It’s not mandatory for anybody. It’s an issue that we have to solve from a public health perspective,” he said. “I can’t live in peace with my conscience knowing that a woman who has to have an abortion, and can’t afford to, ends up in the hands of a medicine man that ends up hurting or killing her with a needle.” 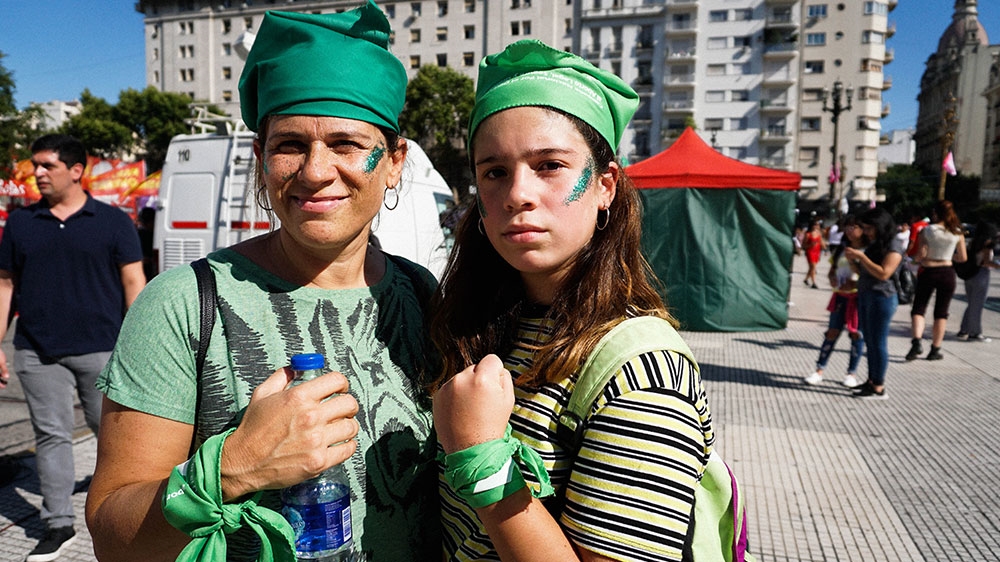 It’s not clear when the president will officially unveil his proposal. What is clear is that it will face stiff opposition from the Catholic Church, a powerful force in Argentina, and other anti-abortion rights groups that are waging campaigns against legalisation.

The Catholic Church will hold a special mass at an important cathedral in the city of Lujan on March 8 – international women’s day – to “defend life and defend our women”, and another march is planned for March 28, in honour of “the day for the unborn child”.

In remarks made on Argentine radio this week, Monsignor Oscar Ojea, president of the Episcopal Conference of Argentina, said all lives, at any stage of development, require protection. “A woman is the owner of … her own body – that’s what we are constantly told, through many forms of media. But that’s not the case. We defend all life and every life, the rights of each and every one,” he said.

For Monica Menini, a lawyer and one of the original abortion rights campaigners, this year is a remarkable culmination of many years of activism.

Menini notes an important shift among the public, and legislators, who may personally not be in favour of an abortion, but who believe they should not stand in the way of a woman’s choice.

“They are saying it out loud, calmly, that this doesn’t have to do with what I think, but it’s about how we legislate. That didn’t exist before: this clear-eyed view in society that it isn’t just about how we think for ourselves,” Menini said.

She said that the 2019 election campaign, during which candidates had to stake out positions on the abortion issue for the first time, was an important turning point.

Menini’s province of Salta, a conservative jurisdiction in the north of the country, for example, had no legislators or senators that voted in favour of legalisation in 2018. This year, she says, there are several in the lower house, and the Senate, who have expressed their support.

“We never know how this is going to end. But the chances are better than in 2018, without a doubt,” she said.

Qantas warns coronavirus impact of as much as $99m

US Election 2020: Meet the voters behind Bloomberg’s surge