In this fast-moving environment, we need to think in scenarios, rather than pretending to know how the economy will evolve over the next 1 ½ years.

We’ve developed four scenarios of how the virus, the lockdown measures and consequently the different economies could evolve. Needless to say, even these scenarios cannot try to fully predict reality, but we hope they can provide a benchmark for both the extremes and the middle-ground. In each case, we’ve laid out some possible health factors that may be driving the scenarios – although we’d emphasise these are not meant to be interpreted as forecasts.

Scenario 1: Our base case
We’ve discussed our base case, and what that means for the major economies, in other parts of our latest monthly update.

It assumes that the lockdowns eventually manage to flatten the curve, although not entirely. Given socio-economic tensions and the significant economic fallout, the first European governments decide to begin relaxing the lockdown measures at the end of April. Others will follow in May. The return to normality is gradual, and social distancing continues for at least the entire summer.

A proportion of those who can work from home continue to do so for the foreseeable future. Meanwhile, places, where you can socialise (pubs, cinemas etc), begin to open with strict distancing rules in place. Global travel remains restrictive, but a combination of vaccine development, more widespread testing capacity and higher surge capacity within critical healthcare services, means full lockdowns can be largely avoided if the virus spreads again as we approach the northern winter.

As a result, the economic recovery will be u-shaped. Still, most countries will experience a more severe contraction of economic activity than during the financial crisis.

Our base case at a glance 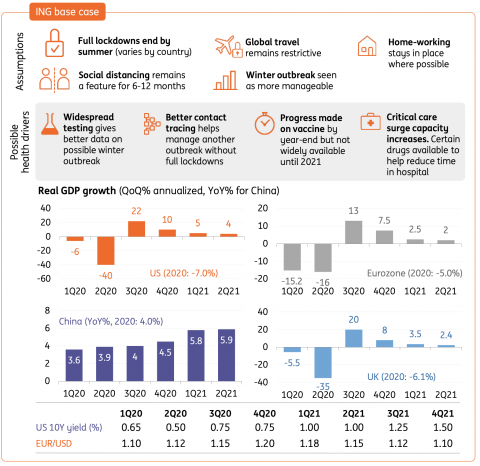 Scenario 2: Winter lockdowns return
This is a slight variation of our base case scenario.

It starts off in much the same way, with a gradual easing of lockdown measures in May and June. However, in this scenario, the virus returns in the autumn and despite more widespread testing efforts and contact tracing, the new spread pushes most economies back into lockdown.

Crisis management is more experienced than in Spring 2020 and containment measures could be more tailor-made, keeping some regions and sectors up and running. For indicative purposes, we’re assuming it will take until April 2021 before the virus is back under control and economies, as well as societies, begin to return to normality. This is a ‘W-shaped recovery’.

GDP growth would be lower in 2020 but higher in 2021 than in our base case scenario. However, it may well take until late-2022 before most economies have returned to their pre-crisis levels.

Scenario two at a glance 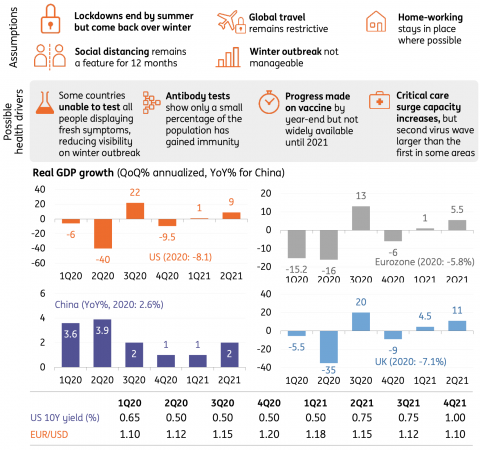 Scenario 3: The ‘best’ case
In our ‘best’ case scenario, the Western world follows in the footsteps of China by ending the lockdowns as soon as the curve of new infections has been flattened.

A quick return to normality is assumed to materialise towards the end of April. This scenario also assumes that the virus doesn’t come back again in the winter, either because a larger-than-expected proportion of people have already had the virus and built immunity, or because control measures become much more effective.

Even so, some economic losses would not be offset immediately. But government measures like guarantees, liquidity support and short-time work schemes foster a quick and strong rebound, notwithstanding some differences across countries depending on when the lockdown measures end. This is effectively a ‘v-shaped’ recovery scenario.

In this scenario, most economies would experience a mild recession of some 2-3% year-on-year but growth in 2021 would accelerate, returning most economies to their pre-crisis levels.

Scenario 3 at a glance 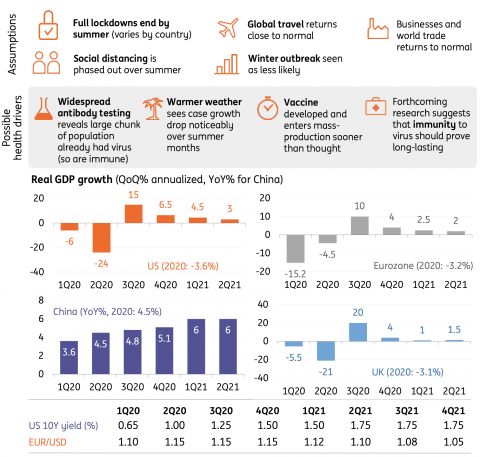 Scenario 4: The ‘worst’ case
To give a sense of how the worst-case scenario for the global economy might look, we assume here that the lockdown measures last until the end of the year.

We’re assuming that things return to normal from 2Q21, perhaps if a vaccine is developed and able to be deployed over the winter months. The recovery here may be a little faster and stronger than in the other scenarios, as the virus is assumed to be completely under control. This is an ‘L-shaped’ recovery. Needless to say, this is an extreme scenario with lots of economic, social and political turmoil, and one that looks pretty unlikely at this stage.

In this scenario, most economies would experience an unprecedented and almost unimaginable contraction in 2Q20 of around 50% quarter-on-quarter annualised. The year 2020 would go down in the history books as the year with the most severe recession on record, seeing most economies shrinking at double-digit rates for the year as a whole.

The rebound in 2021 would be relatively muted and it would take until 2023 before most economies have returned to their pre-crisis levels.

Scenario 4 at a glance 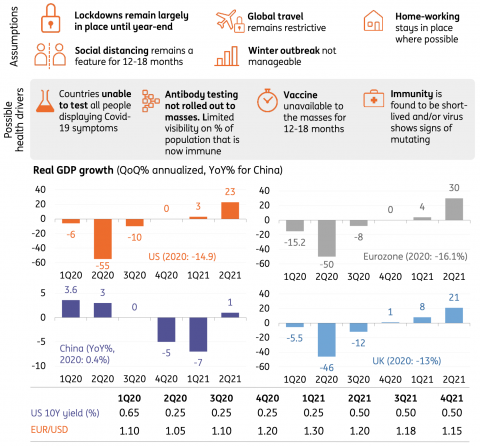