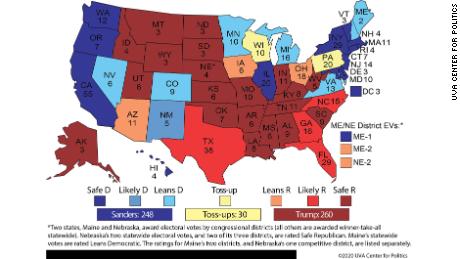 The map allots 260 electoral votes to Trump, 248 to Sanders and puts 30 in the pure toss-up category.

“In our view, we think a Sanders nomination would tilt the election more toward Trump, to the point where the ratings would reflect him as something of a favorite,” write Kyle Kondik and J. Miles Coleman of the map. “However, we would not put Trump over 270 electoral votes in our ratings, at least not initially and based on the information we have now.”

How does that compare with the current Center for Politics map featuring a race between an unknown Democrat and Trump? That map produces 248 electoral votes for each side, with 42 in the pure toss-up category.

The changes from that generic map to the Sanders map? Arizona, Florida, Georgia, North Carolina, Texas and Virginia, as well as Nebraska’s 2nd District (Nebraska gives out electoral votes to the popular vote winner of each of its congressional seats), all move in Republicans’ direction.

“What we’re doing here is giving the Republicans a boost in places where recent Democratic gains have been fueled by growth in affluent, highly-educated suburbs. Sanders may ultimately replicate Hillary Clinton’s numbers in places like metro Atlanta, Dallas, Houston, and Phoenix. Still, there are reasons to believe that his left-wing economic and governing philosophy, particularly as contrasted with many Americans’ positive views of the economy, may cost the Democrats some support in these places.”

This is — obviously — a very early look at a general election fight that could go in one of a thousand ways, particularly with the coronavirus outbreak already disrupting the world economy and threatening to spread across the globe.

And of course, a first-look map at a general election matchup between Trump and Hillary Clinton in 2016 would almost certainly have shown a strong advantage to the former secretary of state. We know how that turned out.

The Point: What the electoral map would look like for Democrats isn’t just a theoretical conversation. Sanders’ rivals for the party’s nomination have repeatedly suggested — as recently as Tuesday’s debate — that nominating the Vermont democratic socialist would be a major risk for the party to take. This map will provide fodder for that argument.

Fed rate cut next month? Traders are betting on it

The world on a string | News, Sports, Jobs