Sports minister Kiren Rijiju has offered support to Srinivas Gowda, who is being compared to decorated Olympian Usain Bolt, after the Karnataka man came up with a record-breaking run at a Kambala racing event in Karnataka. 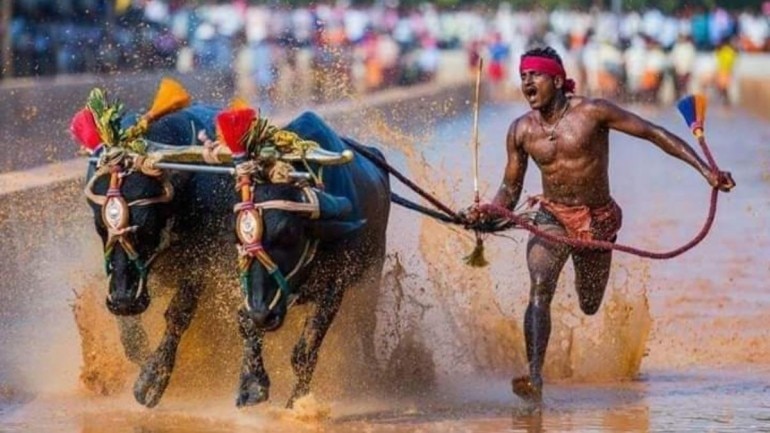 Srinivas Gowda, a Kambala jockey from Karnataka, is all set to get an opportunity to meet ‘top’ Sports Authority of India coaches after his record-breaking run at a Kambala racing event earlier this month.

Srinivas Gowda shot to fame after it came to light that the 28-year-old man had broken the record for the fastest run in Kambala, a sport from Karnataka where farmers sprint with a pair of buffaloes on slush tracks.

Srinivas Gowda reportedly completed the 142m race in just 13.42s, setting a new record in the traditional sport of Karnataka.

Srinivas Gowda, who is a part-time construction worker, was soon compared to sprint great Usain Bolt on social media. A section of users calculated that Srinivas would have completed a 100m race in 9.55s, which is 0.03s faster than Usain Bolt’s 100m world record.

He is Srinivasa Gowda (28) from Moodabidri in Dakshina Kannada district. Ran 142.5 meters in just 13.62 seconds at a “Kambala” or Buffalo race in a slushy paddy field. 100 meters in JUST 9.55 seconds! @usainbolt took 9.58 seconds to cover 100 meters. #Karnataka pic.twitter.com/DQqzDsnwIP

Responding to the buzz on social media, Kiren Rijiju, Minister of State of the Ministry of Youth Affairs and Sports, said he will invite Srinivas Gowda for trails by top SAI coaches.

“I will call Srinivasa Gowda for trials by top SAI Coaches. There’s a lack of knowledge in masses abt standards of Olympics, especially in athletics where ultimate human strength and endurance are surpassed.I’ll ensure that no talents in India are left out untested,” Kiren Rijiju was quoted as saying by ANI news agency.

Srinivas on comparisons to Bolt

Meanwhile, Srinivas Gowda played down the comparisons to Usain Bolt. “People are comparing me to Usain Bolt. He is a world champion, I am only running in a slushy paddy field,” the Karnataka Kambala jockey said.

This is not the first time Kiren Rijiju has assured support to athletes after their social media clips went viral. Last year, the sports minister invited a Madhya Pradesh man, Rameshwar Singh after a video of him completing a 100m race on barefoot in 11s went viral.