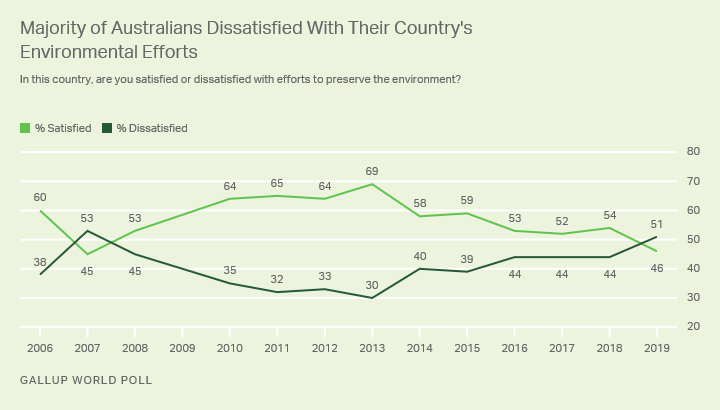 The deadly fires have fueled the long-standing debate among Australians about the potential impact of climate change versus the economic repercussions from policies that would limit carbon dioxide emissions in the world’s third-largest exporter of fossil fuels, based on carbon dioxide emissions potential. The country’s primary fossil fuel export, coal, has been identified as “essential to Australia’s standard of living.”

For most of the past decade, Australians have largely been satisfied with their country’s efforts to preserve the environment. Before 2019, dissatisfaction exceeded satisfaction only once, in 2007, after the bushfires that year, when 53% of Australians were dissatisfied and 45% satisfied. 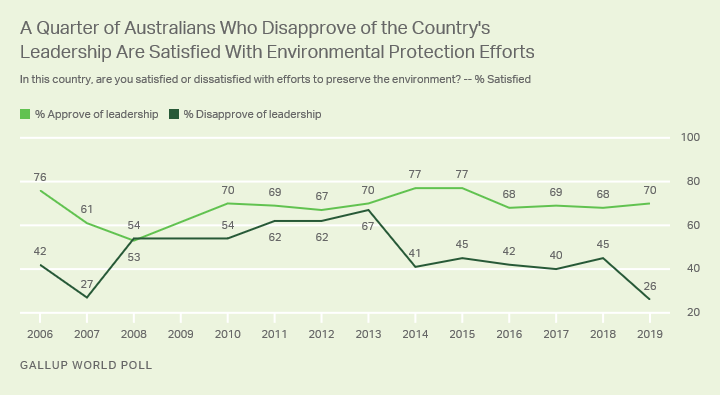 The recent drops in satisfaction with environmental preservation efforts among those who disapprove of Australia’s leadership coincide with the election of political parties and leaders who have promoted economic development over environmental protection. There was a 26-percentage-point drop from 2013 to 2014, coinciding with the election victory of the Liberal/National Coalition, which brought former Prime Minister Tony Abbott to power. One of Abbott’s first policy goals was to repeal taxes on the mining industry and carbon emissions in the country.

A second, 19-point drop took place between 2018 and 2019. This coincided with the Liberal/National Coalition’s continuing governance of the country and the rise of Scott Morrison as prime minister. Morrison has been a vocal proponent of the coal industry and a critic of environmental activists.

Even before the devastating fires that have ravaged Australia, the country’s public was increasingly unhappy with efforts to preserve the environment. However, it remains to be seen whether this dissatisfaction will be sustained once the fires are out.

For the Australian government, the fires pose a series of unique challenges: rebuilding lost communities; saving species brought to the brink of extinction; and preparing for likely future fires. Morrison has already been the target of environmentalists’ ire over his support for the coal industry and lack of emphasis on protecting the environment. In terms of future policy, it remains unclear whether this criticism will result in more robust action to preserve the environment or whether emphasis on economic development will continue to win out. On the political front, it also remains to be seen whether climate-change policy will trigger the downfall of an Australian leader.

Learn more about how the Gallup World Poll works.

Kit Siang: Pakatan must be saved as it is the only political group committed to reforming Malaysia | Malaysia

World No.2 Pliskova out of Aussie Open