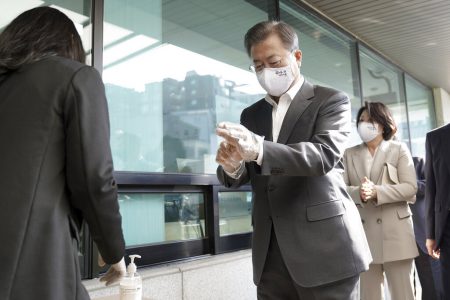 South Korean President Moon Jae-in wearing a face mask to help protect against the spread of the new coronavirus wears plastic gloves as he arrives to cast his early vote for the upcoming parliamentary election at a polling station Friday in Seoul, South Korea. The elections will be held Wednesday at about 14,300 polling stations all over the nation to pick lawmakers. (Lee Jin-wook/Yonhap via AP)

Here are summaries of the latest stories worldwide on the coronavirus pandemic, including:

• Authorities in Greece express concern over build-up of migrants near Greek islands;

• Programs to celebrate the Bengali New Year are suspended due to the coronavirus;

• The pope says he pray for virus-stricken countries.

ATHENS, Greece — Authorities in Greece say they are concerned about indications of a build-up of migrants and refugees on the Turkish coast near Greek islands despite movement restrictions in effect in both countries aimed at stopping the spread of COVID-19.

“We have seen signs of activity on the shores facing (the islands),” Stelios Petsas, the Greek government spokesman, said. “We will … continue to do whatever it takes to defend our sovereign rights and guard the borders of Greece and Europe.”

The Greek islands last year were the European Union’s busiest entry point for illegal migration, according to the border protection agency Frontex.

In early March, daily clashes broke out at the Greek-Turkish land border after the Turkish government said it would no longer stop migrants heading to Europe.

Greek Defense Ministry officials say the military has remained on alert at the land and sea borders with Turkey since that crisis.

DHAKA, Bangladesh — Bangladesh has recorded five new deaths and another 182 new cases of infections from the coronavirus over the last 24 hours, the country’s health minister said today. With the latest figures, the death toll stood at 39 while the number of confirmed cases rose to 803, said Zahid Maleque.

He said transmission of the virus has spread in many areas. Dhaka has remained a major hotspot of the virus while some neighboring districts are also in trouble.

Bangladesh, a densely populated nation of 160 million people, is desperately trying to contain the virus from spreading by enforcing a nationwide lockdown until April 25.

The country has suspended all programs to celebrate the Bengali New Year on Tuesday. In the South Asian country, community transmission has taken place for weeks through Bangladeshi expatriates who returned from Italy and some other hard-hit countries.

VATICAN CITY — Pope Francis says he prays for all the countries struggling with COVID-19 cases, the United States and European nations among them.

He has also expressed his closeness and affection to these nations, “several with great numbers of the infected and the deceased.

“Italy, the United States, Spain, France, the list is long,” said Francis before giving a blessing to mark what is celebrated in many places today as “Little Easter.” He also hailed the contribution of women working in hospitals, on police forces or in stores during the pandemic while juggling care of children, elders or disabled relatives at home. He noted during weeks of stay-at-home orders, women are at risk of suffering domestic violence.

At an early morning Mass in the Vatican hotel where he lodges, Francis prayed for “rulers, scientists, politicians, who have begun to study the way out, the post-pandemic, this ‘after’ that has already begun.” He urged them to “find the right path, always in favor of the people.”

CAIRO — Egypt’s chief prosecutor late Sunday ordered 23 people to remain in detention for 15 days pending an investigation into blocking a road to a cemetery in a Nile Delta village to prevent the burial of a physician who died from the coronavirus.

The 64-year-old physician died on Friday in a quarantine-designed hospital in the Suez Canal city of Ismailia, and her body was being transferred to her husband’s village of Shubra el-Bahou in the Nile Delta when dozens of villagers tried to stop her burial. They feared that the burial would spread contagion. Police fired tear gas to displace the protesters and arrested 23 of them.

Egypt has reported at least 159 fatalities, and 2,065 confirmed cases.

KYIV, Ukraine — The mayor of the Ukrainian capital said today that a famous historic monastery in Kyiv is closing for quarantine after dozens of its monks have tested positive for the new coronavirus.

Kyiv Mayor Vitaly Klitschko says the Pechersk Monastery had 90 cases of coronavirus, including 63 in the last 24 hours. He said the city authorities will send a medical team to conduct extensive testing at the monastery.

The monastery is known for its extensive system of caves and tunnels, containing centuries-old cells for monks and burial places. It’s one of the top tourist sites in the Ukrainian capital.

Ukraine has registered 3,102 coronavirus cases, including 495 in the capital, and 93 deaths.

MADRID — The spread of the coronavirus outbreak in Spain continues to slow down, with 517 new deaths recorded overnight and with the lowest number of infections logged in more than three weeks, nearly 3,500.

The Spanish health ministry’s figures today bring the overall death toll of the pandemic in the country to 17,489 and the total positive cases to 169,496.

Heavy industry and construction workers are returning to work today after a two-week hiatus in economic activity, but the government is keeping most Spaniards under confinement for the fifth week in a row.

Retail stores and services are still required to stay closed, and the government is strongly encouraging office workers to keep working from home.

Some health experts and regional politicians argue that it’s premature to ease any part of the lockdown order. Police in Madrid handed out face masks to the few commuters taking public transportation to work in the early hours of today.

JAKARTA, Indonesia — Indonesia’s president Joko Widodo has pledged to be more transparent for information related to the new coronavirus as infections spiked in the world’s fourth most populous country.

Last month, Widodo admitted that he deliberately held back information about the spread of the coronavirus to prevent the public from panicking.

Now, his view over data transparency has changed. In a cabinet meeting introduction which was televised nationwide today, he asked his cabinet ministers and the COVID-19 task force to be well integrated and transparent to the public.

Indonesia confirmed 4,557 COVID-19 cases with 399 deaths, the highest number of recorded fatalities in Asia after China.

Widodo called on the Health Ministry and the COVID-19 task force to improve and accelerate PCR testing, which scientists say is crucial in the battle against the deadly pandemic.

Indonesia, a country of 270 million, had only tested 27,075 people using the polymerase chain reaction, or PCR, method so far; a low number that has prompted public scrutiny of the country’s testing capacity and confirmed cases, which many believed remain undetected.

The figure is expected to increase in the next few days as the government last week imported two automatic RNA extractors and 18 PCR detectors from Switzerland and will be distribute to 12 out of the country’s 34 provinces that have been classified as a “red zone” area of the new coronavirus.

LONDON — Prime Minister Boris Johnson is recuperating at his country retreat after praising nurses who took care of him during the seven nights he spent in the hospital fighting the new coronavirus.

Dressed in a suit, Johnson said in a video posted on Twitter after his discharge from St. Thomas’ Hospital in London on Sunday that it was “hard to find the words” to express his debt of gratitude to the National Health Service for saving his life “no question.”

He listed a number of the frontline staff members who cared for him during his week-long stay at St. Thomas’ Hospital in London but singled out two nurses who stood by his bedside for 48 hours “when things could have gone either way.”

The pair were later identified as Jenny McGee from New Zealand and Luis Pitarma from Portugal.

After his release from the hospital, Johnson made his way to Chequers, the prime minister’s country retreat northwest of London, and on the advice of his medical team won’t be returning to work immediately, his office said in statement.

TIRANA, Albania — Kosovo authorities report a significant increase of the COVID-19 cases and have taken other restrictive measures to contain the virus.

Health authorities said today there were 79 new virus cases, an almost one-third increase compared to a day earlier, reaching a total of 362. The virus also has killed seven people.

Most of the new cases, 35, were in the southern commune of Ferizaj, 40 kilometers (25 miles) south of the capital Pristina which also shelters the U.S. military base of Camp Bondsteel nearby.

The Health Ministry also put Pristina under quarantine limiting the movement of the people.

Kosovo is in a lockdown with all its land and air crossing blocked, schools, cafes, restaurants and gyms shut while shops supplying food, medicine and other basic items can open during the day.

SEOUL, South Korea — South Korea’s president has vowed to focus on saving jobs and protecting the economy amid worries about a possible mass unemployment in the wake of the coronavirus pandemic.

President Moon Jae-in said during a meeting with presidential advisers today that South Korea’s economy cannot help being affected by the coronavirus outbreak.

Moon says a latest progress in South Korea’s anti-virus quarantine campaign is easing the outbreak’s economic impact. But he says the biggest concern is an employment issue because the number of people seeking unemployment benefits is sharply rising.

Moon says “It may be the beginning of pains … We must work out special countermeasures.”

He also urged the South Korean people not to lower their guard against the coronavirus despite a recent slowdown of new infections in South Korea.

Moon says it’s not time to feel relieved yet though “a confidence is growing” regarding the prospect for a quarantine victory over the coronavirus.

ISLAMABAD — Pakistan Prime Minister Imran Khan issued a global plea directed at the world’s richer countries and international financial institutions to provide debt-relief to poor countries who are being devastated by the battle against the coronavirus, where forced lockdowns to stem its rapid transmission are crippling already wretched economies and causing widespread hunger and misery for the poor.

In Pakistan the government has launched an ambitious program to help the millions of daily wage earners who barely rise to poverty level. The program provides 12,000 rupees (roughly $75) to 10.2 million low income families hit hardest by the countrywide lockdown that has been in effect in Pakistan for nearly one month.

Khan last week relaxed the lockdown to allow the reopening of the construction industry, which employs the vast majority of the country’s daily wage earners. His call for debt-relief made late on Sunday in a televised address was a repeat of a warning he issued last month in an interview with The Associated Press when he said the world’s rich countries will have to look at writing off the back-breaking debts carried by much of the third world.

Pakistan’s total debt load and liabilities according to the independent financial newspaper The Dawn is 41 trillion rupees or roughly $246 billion. Khan said his reliefp ackage to deal with the virus amounts to roughly $8 billion for a population of 220 million. This compares, he said to countries like the United States that announced a $2 trillion package or Germany with a 1 trillion Euro package.

Pakistan so far has 5,374 confirmed cases of the coronavirus with 93 deaths but testing has been slow and so far the country is carrying out about 3,500 tests each day and plans to increase that to 5,500 as more tests become available. That includes thousands from China which has sent plane loads of protective equipment to Pakistan as well as testing machines, ventilators and medical personnel.

Today’s breaking news and more in your inbox

Thousands gather for Women’s March rallies across the U.S.