Ahmedabad, India – Donald Trump is on his maiden visit to India, and his first stop is the western state of Gujarat, the home of Prime Minister Narendra Modi, who has pulled out all stops to woo the US president.

The trip comes as the two countries have failed to agree on a trade deal as Trump, who has made trade a cornerstone of his diplomacy, has demanded New Delhi open its market to more American goods.

As India’s growth has slumped in recent years, the Hindu nationalist government has turned protectionist and raised tariffs that have irked the Trump administration.

“We’re not treated very well by India, but I happen to like Prime Minister Modi a lot,” the US president said before the trip.

President Trump has hinted there will not be a trade deal during the trip as his administration has been trying to reduce its $25bn trade deficit with India. Bilateral trade between the two countries is worth $142bn.

Trump vowed on Monday to boost trade ties between the US and India, and said Washington was prepared to supply India with defence equipment ranging from drones to helicopters and missile systems, according to Reuters.

It is an honour that he will be with us tomorrow, starting with the historic programme in Ahmedabad! https://t.co/fAVx9OUu1j

Analysts say Modi would like to use his personal chemistry with Trump to smooth over the differences on trade.

On Monday, the Indian prime minister tweeted: The “visit is definitely going to further strengthen the friendship between our nations. See you very soon in Ahmedabad.”

The US president visited the humble home of India’s independence hero Mahatma Gandhi in Ahmedabad with the Indian prime minister shortly after arriving in India.

Highlight of the trip

Analysts say the highlight of the trip will be the joint Modi-Trump address to an audience of more than 100,000 at a new cricket stadium in Ahmedabad for the first leg of the trip, which comes in an election year.

They say the trip is high on optics and Trump will use the occasion to woo nearly 2.5 million Indian American voters.

Trump praised India’s economy and drew loud applause when he said Washington and New Delhi are “united in our iron clad resolve to defend our citizens from the threat of radical Islamic terrorism.”

As he embarked on the visit, the US president tweeted in Hindi saying he was looking forward to it.

The event, called “Namaste Trump” (Hello Trump), seems to be Modi’s return favour to Trump, who hosted the Indian prime minister in the US city of Houston last September. The two right-wing leaders had addressed a crowd of 50,000 as part of a “Howdy Modi” extravaganza.

Ahmedabad is decked out, with the road from the airport to the Motera stadium decorated with life-sized posters of Modi and Trump.

Walls have been erected along the route, apparently to prevent Trump from catching a glimpse of slums, though municipal authorities said it was part of a “beautification” drive. 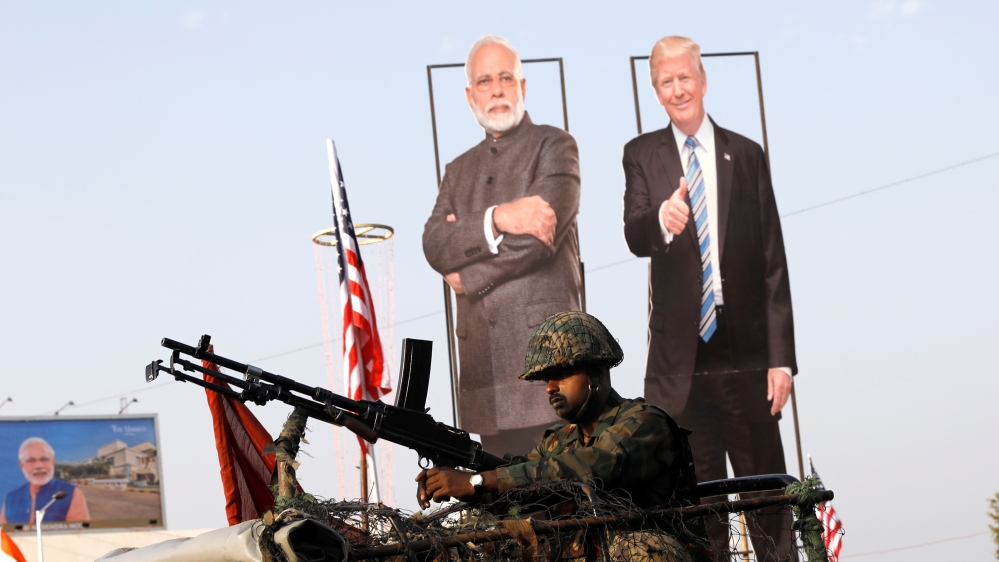 Earlier this week, Trump said Modi had assured him there would be about seven million people to welcome him on the streets.

President Trump will later in the day leave for Agra city – the home of the iconic Taj Mahal in northern Uttar Pradesh state. His 36-hour trip will culminate in the capital, New Delhi, where he is expected to hold talks with the Indian prime minister.

Ahead of the much-awaited visit, a senior US official said that Washington was concerned over the rights of minorities in India, adding that the president will raise these issues, especially religious freedom, when he meets with Modi.

Earlier this month, four US senators wrote a letter to Secretary of State Mike Pompeo, saying Modi’s steps in Indian-administered Kashmir and a new citizenship law dubbed anti-Muslim “threaten the rights of certain religious minorities and the secular character of the state”. 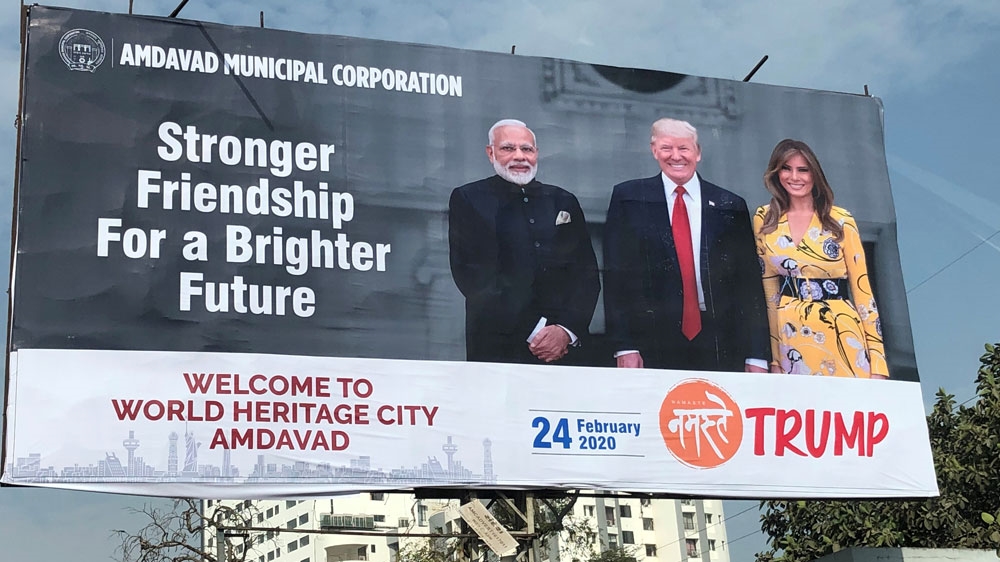 The CAA, coupled with plans for a nationwide citizenship count, has triggered protests across India. Nearly 30 people have been killed in a police crackdown against protesters.

Last week, the US Commission on International Religious Freedom (USCIRF) warned that the bill represented “a significant downward turn in religious freedom in India”.

Former diplomat Kanwal Sibal told Al Jazeera that Trump did not have “the moral right” to question India on minority rights.

“All these reports are a signal that these issues will be raised … we have to wait and see. And I am sure India has a great repose if Trump raises CAA,” said Sibal, a former foreign secretary of India.

“Isn’t Trump the same president who banned the entry of Muslims from some countries? Isn’t he anti-Muslims, anti-Islam? Does he have any moral right to preach to us what is right and what is wrong?” he said.

Some reports have suggested that Trump might also raise the Kashmir issue, on which he has offered mediation several times since last year.

“I don’t see any expectation attached to this visit. No doubt Trump has offered to mediate between India and Pakistan three times in past one year, but did it yield a result? No, and it will not until you don’t work towards it; mere statements are of no use,” said Kashmiri political analyst Professor Siddiq Wahid.

The Hindu nationalist government’s decision to revoke the special status of Indian-administered Kashmir last August has turned into a diplomatic nightmare for the country, and the foreign ministry has been busy explaining the situation to its allies, particularly in the West.

Kashmir, India’s only Muslim-majority state, still remains under security lockdown, with only a partial restoration of communications last month.

A senior Foreign Ministry official told Al Jazeera that New Delhi would consider Trump raising the Kashmir issue as meddling in its internal affairs, and the US president would be advised to “stay out of it”.

India’s main opposition Congress party criticised the government for offering a “political spectatorship” to a foreign leader, leaving aside the critical issues of trade, termination of preferential trade status and a clampdown on H-1B visas that have affected India’s IT industry.

“India and the United States share a strong strategic partnership for decades, and we want this bond to further strengthen our relations,” said Congress spokesperson Anand Sharma.

Sharma, however, cautioned the government that this visit should not become an “extension of the US presidential campaign”.

“We do not become active parties in the elections in another country. This mistake was made in Texas at the Howdy Modi event and the prime minister ought to be careful. These are setting wrong precedents.

“We hope that there would be tangible outcomes on substantive issues and will hear that in the joint declaration to be made by the prime minister and President Trump,” he added.

However, Sibal, the former diplomat, defended Modi’s approach to diplomacy, saying Namaste Trump was the right event to reach out to the American president.

“Everyone knows President Trump is a one-man show in policymaking in United States. He is very ego-centric, and it is important to address his ego.”

“US is our natural ally and it is important that we give their leader a resounding welcome. They should be shameful to call this crucial visit a political spectatorship,” Amitabh Sinha, the BJP spokesperson, told Al Jazeera.

“It is a matter of pride for us to receive the world’s most powerful leader, we should all be together to show our Indianness and not question the event itself,” he added. 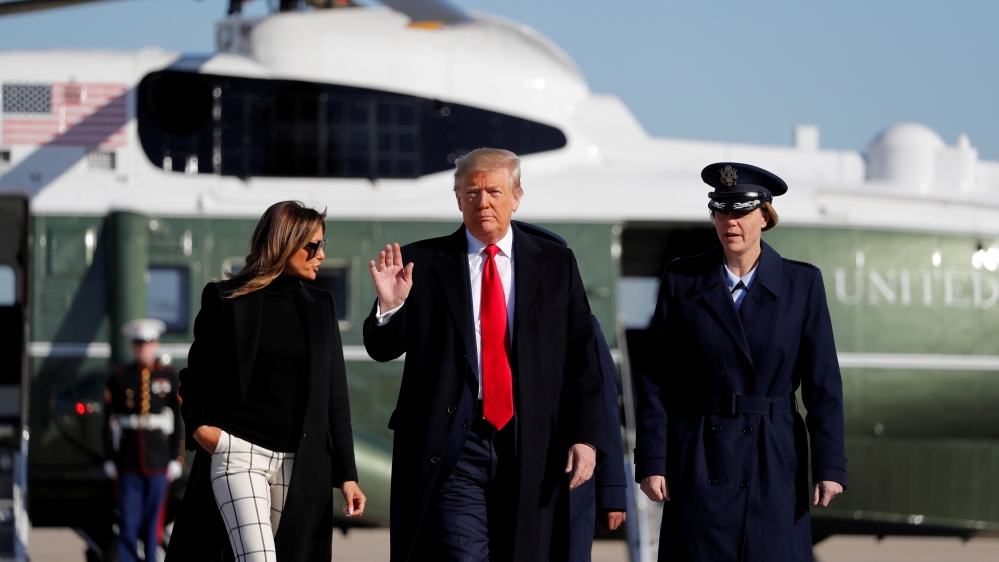 Trump and First Lady Melania Trump prepare to board Air Force One as they depart Washington for India from Joint Base Andrews in Maryland, US [Al Drago/Reuters]

Brexit: What is a level playing field?

The week that was: Stories from the coronavirus saga | News, Sports, Jobs