The world in brief 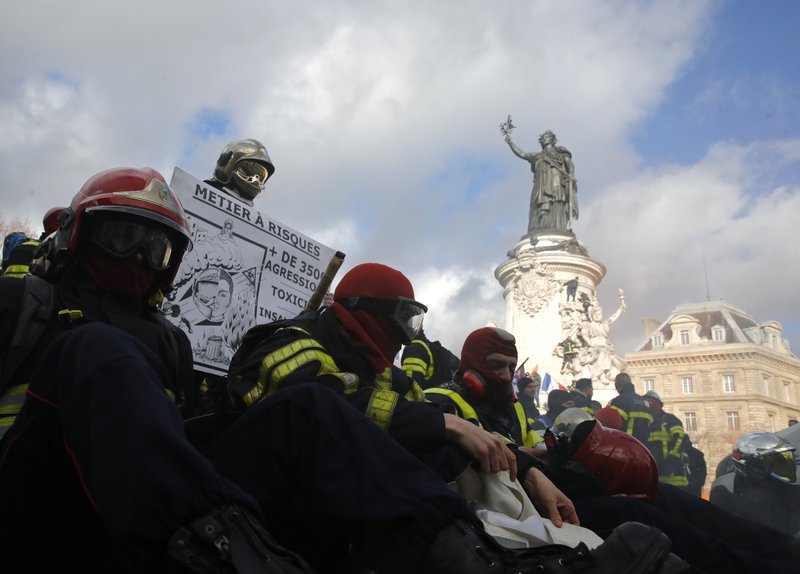 Firefighters gather for a demonstration Tuesday, Jan. 28, 2020 in Paris to demand a better pay and working conditions. (AP Photo/Christophe Ena)

Unions organized the Paris protest for fire service workers all over the country. They set off firecrackers in the capital’s Place de la Republique to draw attention to their cause.

Participants want a raise in risk pay from 19% to 25% to fulfill their missions — which they say reductions in personnel have made increasingly difficult. They say attacks against them are also on the rise.

Paris police said firefighters who tried to break down or scale fencing near the Nation area of Paris were dispersed by water cannons.

Firefighters previously demonstrated in October — marked by clashes with the police. One protester in the southern city of Dijon was hit in the eye and has still not recovered his vision.

Inside aid alleged in Taliban attack

KABUL, Afghanistan — Taliban militants attacked a police base in northern Afghanistan, killing 11, possibly with help from at least one of the policemen inside, local government officials said Tuesday.

The insurgents first overran a checkpoint near the base late Monday and were apparently able to breach the compound with ease because a policeman opened a door for them.

These details were provided by Mabobullah Ghafari, a provincial councilman in Baghlan province where the attack took place. A local police official, speaking on condition of anonymity because he was not allowed to brief reporters about the attack, also gave the same account.

Insider attacks have been steady throughout Afghanistan’s 18-year conflict, with U.S. and NATO troops most often targeted. But when Afghan security forces are targeted, the casualty rate is often much higher.

Last July, two U.S. service members were killed by an Afghan soldier in the southern Kandahar province. The shooter was wounded and arrested. In September, three U.S. military personnel were wounded when an member of the Afghan Civil Order Police fired on a military convoy, also in Kandahar.

BRUSSELS — The European Union on Tuesday slapped sanctions on seven people accused of undermining Ukraine’s sovereignty for their role in organizing Russian local elections in the Crimean Peninsula, annexed by Moscow in 2014.

The seven, who will see their assets frozen and face travel bans in Europe, include a top official in Crimea and senior electoral commission officers in the city of Sevastopol whom the EU blame for running the elections on Sept. 8.

“Through their involvement in the elections, these people actively supported actions and implemented policies which undermine or threaten the territorial integrity, sovereignty and independence of Ukraine,” EU headquarters said in a statement.

The move means that 177 people and 44 “entities” — organizations, associations or companies — are now under EU sanctions over allegations of undermining Ukraine’s territorial integrity.

The EU imposed sanctions on Russia after it annexed Ukraine’s Crimean Peninsula in 2014 and the bloc refuses to recognize Moscow’s authority there. It has separate sanctions targeting the Russian economy, which are due to remain in place until at least July 31.

Print Headline: The world in brief

Coronavirus: US Senators face calls to resign over ‘insider trading’

Virus could shake up world’s most expensive cities