A RECIPROCAL relationship has been created between the Episcopal Church in the United States and the Anglican Church of Mexico. The US Presiding Bishop, the Most Revd Michael Curry, and the Primate of the Mexican Church, the Most Revd Francisco Moreno (pictured), signed a bi­­lateral agreement at a eucharist in St John’s, Chula Vista, California, on Sun­day. It says that the two Churches are called to “share a ministry of prayer and collaboration through the gifts and talents we have to help us in mutual growth where we reflect the kingdom with our actions of justice, peace and love through service, education and the expansion of ministry”. The Angli­can Church of Mexico separated from the US Episcopal Church in 1994.

Calls for unity ahead of elections in Bolivia

THE general secretary of the Bolivian RC Bishops’ Conference, Fr José Fuentes Cano, has said that candidates in the country’s upcoming elections should be “driven by love for their brothers and sisters and a constant com­mitment to the growth of the Bolivian people”. These are the first elections since the former president, Evo Morales, was ousted in November (News, 15 November 2019). Fr Cano said on Sunday: “Being Christian does not only mean not killing, which is already important, but also taking care of one’s brother or sister. Every day we have before our eyes so many attitudes, even habits, of unscrupulous attacks, exercised mostly with the tongue, to­­wards our brothers and sisters. If we continue to offer loans, to say prayers, to practise fasting, without these actions making us people who love, all this is useless.” 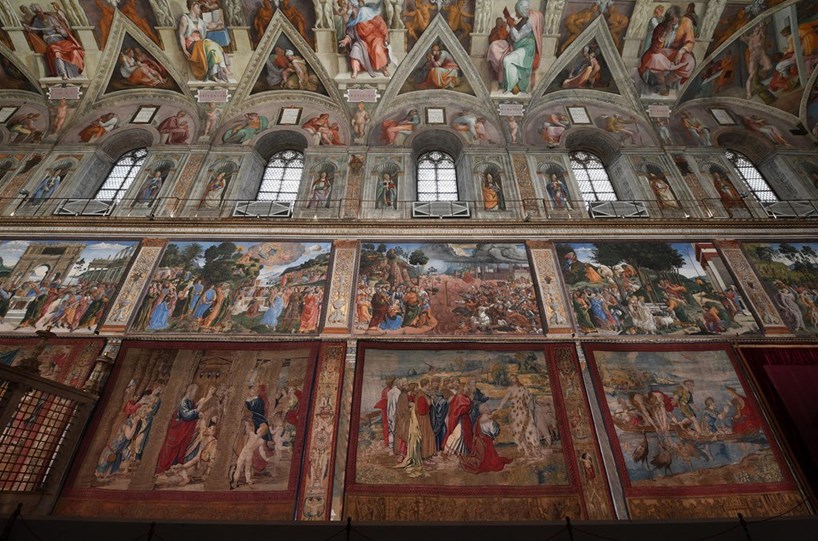 PAReunited: ten tapestries on the Acts of the Apostles by Raphael hang together in the Sistine Chapel, this week, for the first time in 400 years, to celebrate the artist’s 500th anniversary. The set was commissioned by Pope Leo X

THE executive council of the Episcopal Church in the United States has formally approved the readmission of the Episcopal Church of Cuba as one of its own dioceses. Meeting last week, the Council chose Louisville, Kentucky, as the venue for the 2024 General Convention. It also looked at figures that showed a 17.5-per-cent decline in the number of those baptised, and a 24.9-per-cent decline in average Sunday attendance across the Church between 2008 and 2018. The Church of Cuba was expelled in 1966, but the General Convention voted to readmit it in 2018.

THE National Council of Churches of Kenya has launched the Faith and Community Initiative both to enable more men and children to know their HIV status and to combat sexual violence against women and chil­dren. Leaders of member churches will undergo the procedure publicly, and dissem­inate information in an attempt to stop the stigma attached to the disease. The statement calls “upon all our fellow clergy to draw the dis­tinction between HIV the virus, AIDS the disease, and moral character”.

FIFTEEN children died in a fire at a orphanage outside the Haitian capital of Port-au-Prince last week. The orphanage was opened to provide a home for those who had lost their parents in the 2010 earthquake. It was run by a US non-profit religious group, the Church of Bible Understanding, Vatican News reported.

TEXAS diocese has made a $13-million commitment towards racial-reconciliation projects and scholarships for the training and education of people of colour, the Episcopal News Service reported. The Bishop of Texas, the Rt Revd C. Andrew Doyle, said: “The goal is to support the people of our communities who were injured by our past actions.”

Coronavirus: Why India cannot afford to lift its lockdown

Coronavirus: Why India cannot afford to lift its lockdown

Coronavirus: The porous borders where the virus cannot be controlled

List of sports events affected by the virus from China | News, Sports, Jobs

South China Sea: Coronavirus may be giving Beijing an opening